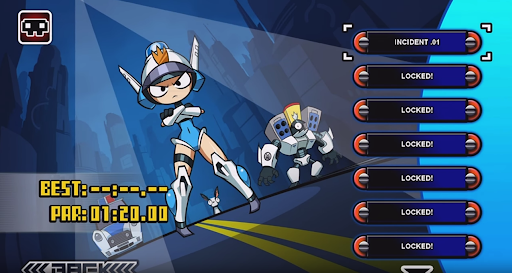 Incident 1 opens with a cutscene that says so much in a very brief amount of time. A crashed police vehicle creates an opportunity for criminals to escape. One criminal summons a bunch of monsters and then laughs. This opening teaches us our objective, who the bad guys are, the narrative, and who our hero is, giving us our motivation. It’s simple but very effective.
Tied together with the character’s cry “Stop! In the name of the Law!” gives the player
their goal for the entire game, catch these baddies. 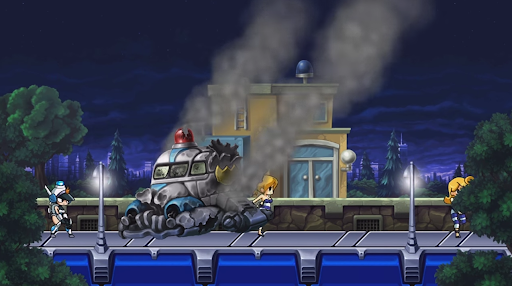 The first level, called Incident 1 begins. A lot is taught by simply looking at the interface without even moving the character. We have a timer, 5 outlines for the escaped convicts, three hearts likely for health, an icon pointing towards the direction of the criminals, and three blocks underneath the player, with one being transparent. 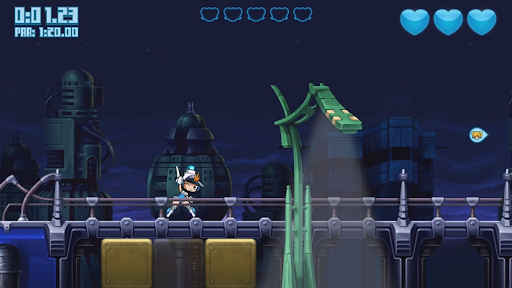 When the level starts, the character has a brief animation where she rolls from the left side of the screen. This is one of the few cues the player has to guide them in the correct direction. Additionally, she faces the right, and we see the escaped convict’s icon pointing towards the right as well. Lastly, if the player moves to the left, there’s nothing to explore. Without ever having played a 2D platformer, the player will very likely know which direction to go with these cues.

If the player experiments with the 4 face buttons on the WiiU Gamepad, they can teach themselves what the game’s core mechanics are; jumping, shooting, and switching. Jumping and shooting will be acted out by the character’s animation, but what about switching? At the start of the level, there are three blocks noticeably underneath the surface the character stands on. The centered block is transparent, and by pressing the A button, the solid and transparent blocks trade places. All solid blocks become transparent and vice versa. Additionally, there is a blue flash that appears from the character’s helmet and a mechanical movement sound to correspond with the action. This teaches the player the switching mechanic in a safe space. Once the player runs to the right, they will continue to see a couple more block sets underneath the surface that can be switched as well. Above the third set of switchable blocks, we see our first escaped convict. She is high above and offers us our first platforming challenge. There are three platforms that we must jump on before regaining convict number 1. The first platform stands above a pit of spikes. There are small gaps on the left and right side of the platform that can cause the player to fall into the spikes and die. If this happens, the players loses one heart, giving room for some error without a lot of pressure. The challenge is very small since the jump arc covers much more space than the gap. The second platform is small, and offers the player the first enemy to shoot. The third platform takes our character right into the first baddie. Shooting her doesn’t work, so we must walk up to her. As soon as she is collected, the main character says “Gotcha” and the screen displays the icon for the next character, pointing to the right. 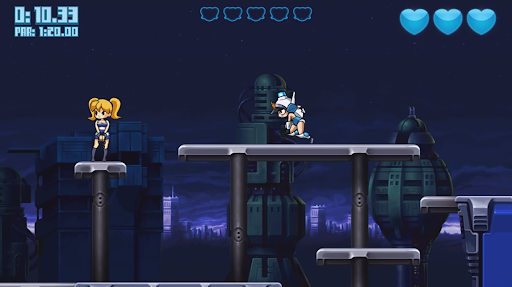 Here the player will encounter two more enemies blocking the path. This provides a brief shooting challenge, followed by the first switching challenge. Shooting the enemies can commonly release an extra heart in case the player died before. 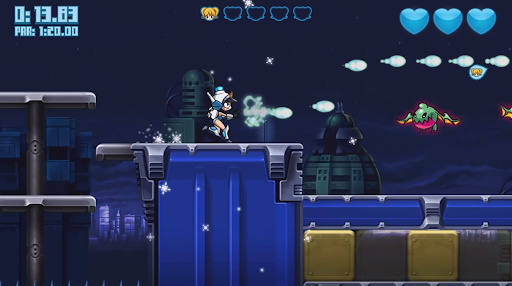 The second criminal sits on a platform that can’t be reached with jumping. There are a set of three switchable blocks, followed by another set of three switchable blocks. They are opposite to each other, so if the top set is solid, the bottom set is transparent. In between both sets of blocks, there is enough space for the player to stand. Making the top transparent allows the player to fall through, and then must make the bottom set transparent, landing the character on top of a cute dog-disguised-checkpoint. 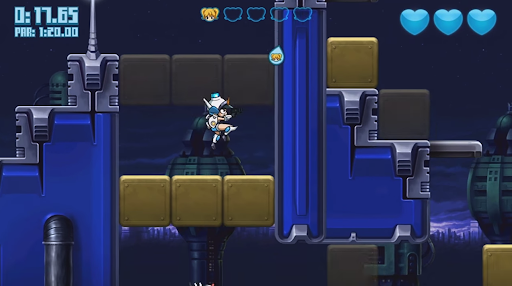 Understanding how the switching mechanic works, the player must now jump towards the second criminal by switching a block mid air, becoming a solid surface to land on. If the player accidentally switches the transparent block into a solid, while the character’s hit box collides with it, they will lose a heart, and have to start over from the checkpoint. 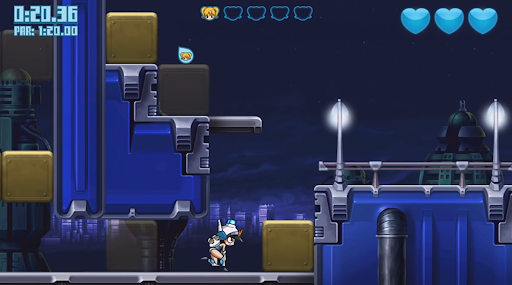 Heading towards the third criminal introduces the player to the bomb enemies. With a shot, they stumble momentarily and then explode. A few more enemies, another checkpoint, and now the player has reached the next main switching challenge. Six switchable blocks serve as a bridge over a pit of spikes. The two left and two right blocks are solid, while the two centered blocks are transparent. The player must switch the blocks mid jump two times in this challenge; once to the reach the centered blocks, and once more to reach the right blocks. This is followed by a slightly bigger challenge. A much longer pit of spikes must now be jumped over with separated switchable blocks. There is a gap, 2 solid blocks on the left, another gap, a single transparent block in the center, another gap, 2 solid blocks on the right, and a final gap. The same solution can be applied here. There is one final transparent block above a spike pit, however the gap for this jump is slightly longer. 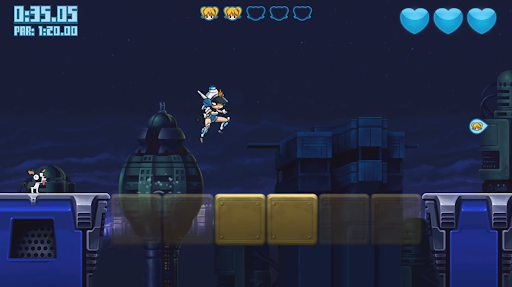 This culminates with another checkpoint. The third criminal stands on a high platform that must be reached by jumping on two switchable blocks. This sequence exists to further challenge the player’s grasp on the switching mechanic.

An icon point upright towards the closest criminal, but at the moment this is unreachable. The player must move rightwards where the next icon points. A group of flying and bomb enemies stand in your way without putting up much of a fight. Two columns of 5 stacked solid blocks stands in the way, turning them transparent and walking through will reveal two more columns of 4 stacked solid blocks, then two columns of 3, then 2, and finally 1. 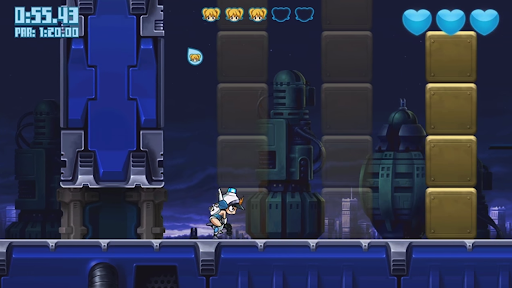 After this, the player cannot go further right and must jump on these switchable blocks starting with the single ones, jumping and switching mid air to jump onto the column of 2, and so on, until reaching column of 5. Here the player will reach the 4th criminal. 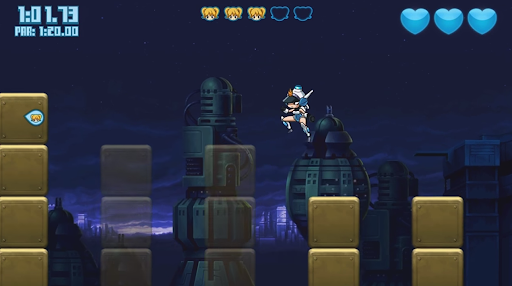 Trekking up left now where the icon points, will give the player a few more baddies to shoot while jumping on small platforms, serving as a final test for shooting. Since the main mechanic of the game is switching, this shooting challenge isn’t much to stress about. Shooting becomes more a tool in later levels. A final switchable block challenge that remains operates the same as the previous challenges prior to collecting a criminal. The 5th one is now collected and a robot vehicle arrives right in front of the character, opening his chest, and pointing at it. Jumping in concludes the level. 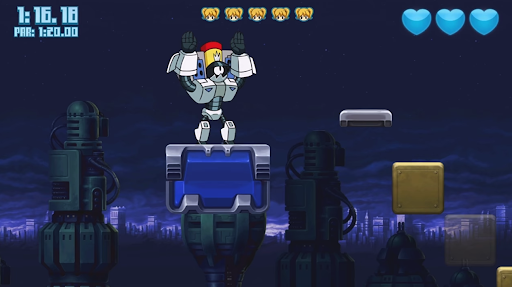 Incident 1 manages to teach a large portion of the main mechanics in its first moments. The player learns how switching, jumping, and shooting works in a safe environment, how the enemies behave, and how to defeat them, all while having a clear narrative to motivate your actions.